I Just Need a Babysitter

In November of 2013 we adopted a rescued feral dog.

In July of 2013, this feral dog was trapped at the plant where I work and subsequently went to live in East Texas with a truly lovely woman and her 2 other dogs.

Unfortunately, this woman was not equipped to rehab a feral and her other two dogs were constantly fighting with the new addition.

So, I got a call that the dog we’d trapped was going to a shelter if I didn’t come get her.

Sigh…I had ‘lived’ with this dog around the plant for a year.  She was typical of the feral dog..with one exception..she seemed to like humans.  Well, most humans.  She’d bark furiously at the ones she didn’t like.

I asked hubby if we could get her, knowing she’d be a big challenge, and given the fact that we are gone from home like 10-12 hours every day, he said yes.

Of course he did.

Since the day we got her we’ve been working on socializing and rehabbing her.   Today, she’s nearly a total transformation.  She still displays some behaviors typical of unsocialized dogs, like growling at new visitors, running from people – particularly new people – and not really being all cuddly.

She’s sort of like a cat in a dog suit.  A white shepherd/Lab mix dog/cat.  It’s that complicated, and that simple, too.

But, look at this face, and tell me how you can’t love it? 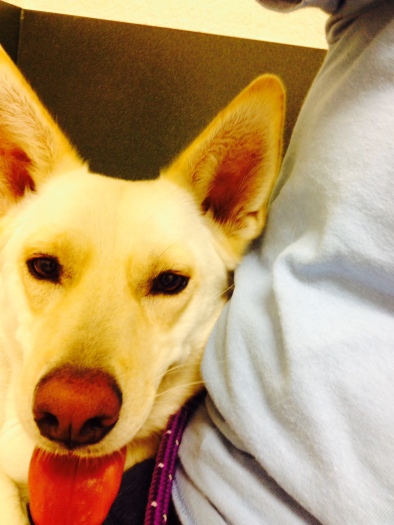 However, that sweet face can also look/sound menacing when she’s confronted with a frightening situation, even though in every way she’s sweet and submissive.

So, last week we had some AT&T U-Verse kids (they weren’t kids, but I swear they weren’t far from it) come to the house to install some new fiber-optic contraption thingy for the Internet and phone in the house.

When they came to the door, the dog immediately growled and paced and barked at them from her post in the kitchen.

“Really?” Kid #1 was not convinced, and of course I couldn’t resist adding to his nervousness…

“Wellll…she’s fine so long as I don’t say THE WORD.”

(there is no word)

“What word?”, he asked, his voice an octave higher.

I raised an eyebrow.

At this point, I’d given the dog her command to stand down.  It’s small and subtle, so Kid #1 hadn’t seen it, but he did see her lay down to watch him.

I gave the stand down signal and she laid down again.

“So, how long will this take?” I asked, since the agent on the phone had said it would be 2-4 hours I was going to make myself comfy in another room and read or whatever.

“Unless the lady says ‘the word” Kid #1 replied, working with one eye on the dog.

“Yes, all I have to do is say one word so you two better behave.” I said, barely able to contain myself.

“Yes ma’am.” they replied in unison.

Work commenced and about 30 minutes later they were ready to leave, but my husband had just walked in the door and the senior tech – Kid #2 – was about to launch into his sales spiel..you know the one where we need to bundle all our services and save money and so on.

An aside: I’ve actually looked into this bundling thing, and doing so would cost us about $5 more a month. Certainly not a deal breaker, but I’ve not heard good things about AT&Ts television reliability.

I had been in another room, the dog with me, but when hubby got home I walked out to the living room where Kid #2 was talking to hubby, and the dog followed me.

“Well, we’re all finished here and if you’d just sign the work order we can get out of here..I mean, we can leave and let you enjoy the rest of your day.” Kid #2 said, shoving the work order and pen towards hubby.

Perplexed, hubby signed the order and the kids nearly ran out the door.

“What did you do?” he asked as they left.

“I resent the implication.” I said, the smile spreading on my face.

Hubby stared at me.

“Okay, I may have implied there was a word I could say that would make the dog attack them so they better behave.”

“You need a babysitter. All. The. Time.”

Posted in Awesomesauce, Guess You Had to Be There, Maybe I'm The Only One Who Thinks This Is Funny

Let’s Start This Week Off Right!

And for me that means laughing till I can’t breathe, so here’s a little something from our friends at Little White Lion.

How to entertain your puppy or kitten, and yourself as well.

If you’re a conservative, like me, then this week has been a bummer…to say the least.

So, to that end I present Tugger.

We can survive, right?

Please tell me we can survive it.